***Thank you for your patience while we fixed some maintenance issues at the Aquatic Center.  We will be open on Monday, January 18, 2021 for Lap Swimming and Water Aerobics.***

The purpose of the Frank D. "Poncho" Roberts Aquatics Center is to provide water-related activities to citizens and visitors so they may enjoy a safe swim experience.

Description of Our Services

The Aquatic Center Division is responsible for the operation and maintenance of the aquatic facility.

The Aquatic Center division will coordinate and provide recreation swimming time and swimming instruction to the public, and coordinate and facilitate swim practice times and meets with Huntsville Independent School District Swim Team and the Huntsville Lakers and Nadadores Swim Teams.

Other programming will be explored and provided in order to meet community needs. For more information about amenities of the aquatic center, please visit our facilities directory. 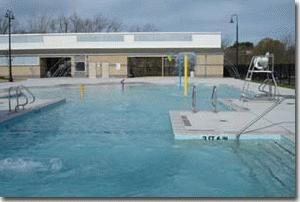 Frank D. "Poncho" Roberts was a beloved member of the community who truly enjoyed working with children. He is known to many people as Poncho, and for his phrase, "togetherness, one more time."

While at a Huntsville Lakers swim meet in Navasota with former City Manager, Bob Hart, he heard Huntsville parents expressing their desire for an aquatic center. He and his wife, Helen "Sugar", went back to Navasota to visit with the City Manager, and discussed how they accomplished constructing their facility.

Poncho and Sugar brought those ideas back to Huntsville and lead the charge of building the new facility. He and his spirit of togetherness brought in over two million dollars for the project.

The City of Huntsville celebrated Poncho Roberts at a City Council meeting on Tuesday, July 16, 2013 by naming the aquatic center after him in honor of his dedication to the construction of the project.