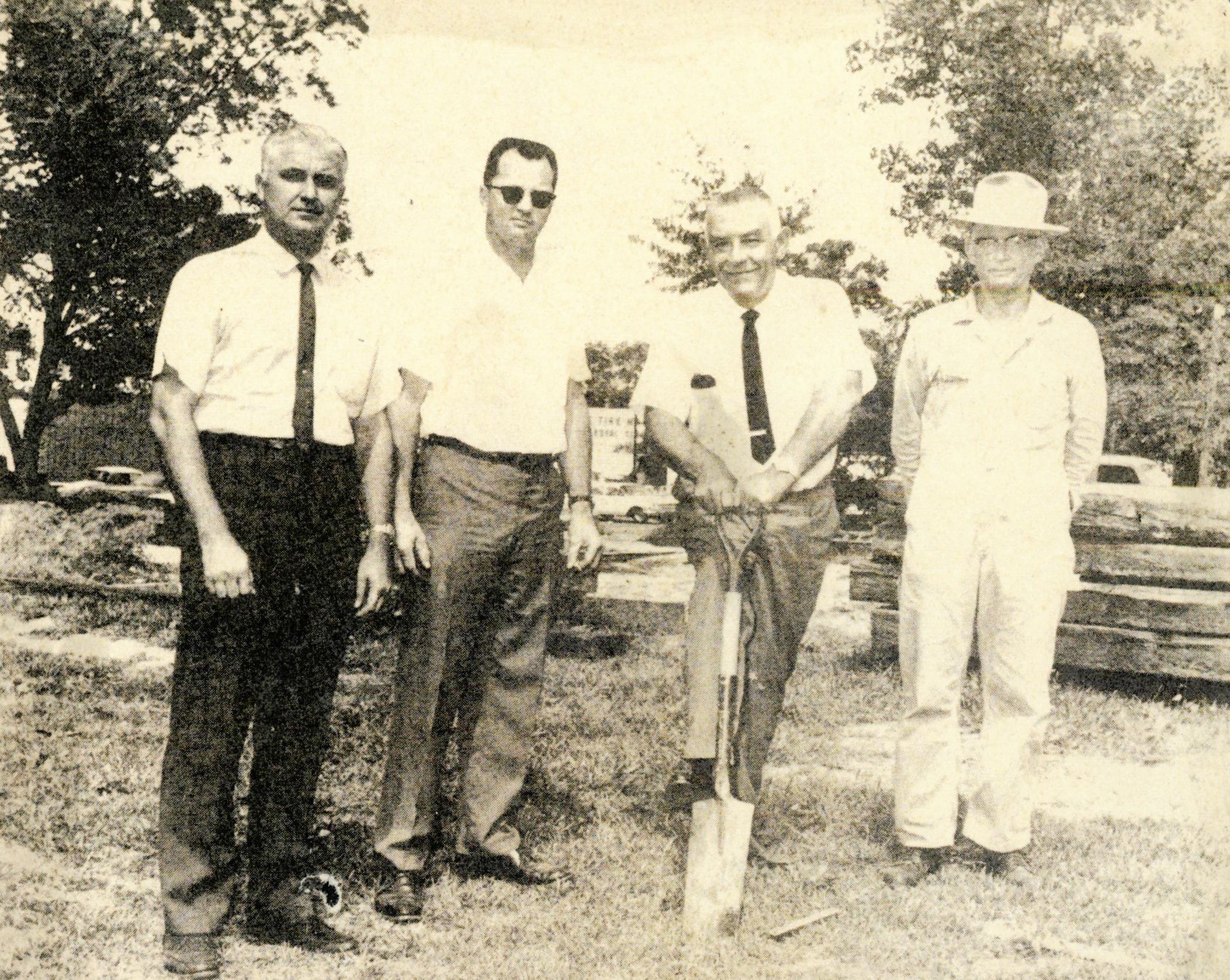 The current Huntsville Public Library was opened on September 24, 1967; however, efforts to provide free library services in Huntsville and Walker County date to the 1930s. Walker County maintained a small lending library containing about 800 volumes on the first floor of the Masonic Lodge from 1931 to 1937. The librarian was Mrs. J. J. Brooks. It is unclear what became of the library and its collection.

Mr. Robert B. Smither, President of the Huntsville Walker County Chamber of Commerce called for a public meeting at the Raven Cafe on September 25, 1941 to support a county library. The City of Huntsville “guaranteed the sum of $100” with the remaining portion to be donated by members of the community. The Huntsville Item printed a bold headline “Public Library to Be Realized for Walker County”.

The Huntsville Free Library opened December 20, 1941 under the librarianship of Mrs. W. W. Mitchell. The collection listed 800 items in the catalog. Hours of operation were from 9:30 a.m. to 5:30 p.m.  The library effort of 1941 apparently did not materialize beyond a brief year. The Texas Almanac and State Industrial Guides for 1943 – 1944 and 1947 - 1948 do not include Huntsville in its listing of City and County Libraries. An examination of the several available Texas Almanacs during the 1950s show that Huntsville was not listed among the cities with a library. Oral interviews with longtime residents of Huntsville produced no recollection of a public library in the community. At least two individuals indicated that the only available libraries were at the public schools and Sam Houston State Teacher’s College (Now Sam Houston State University). 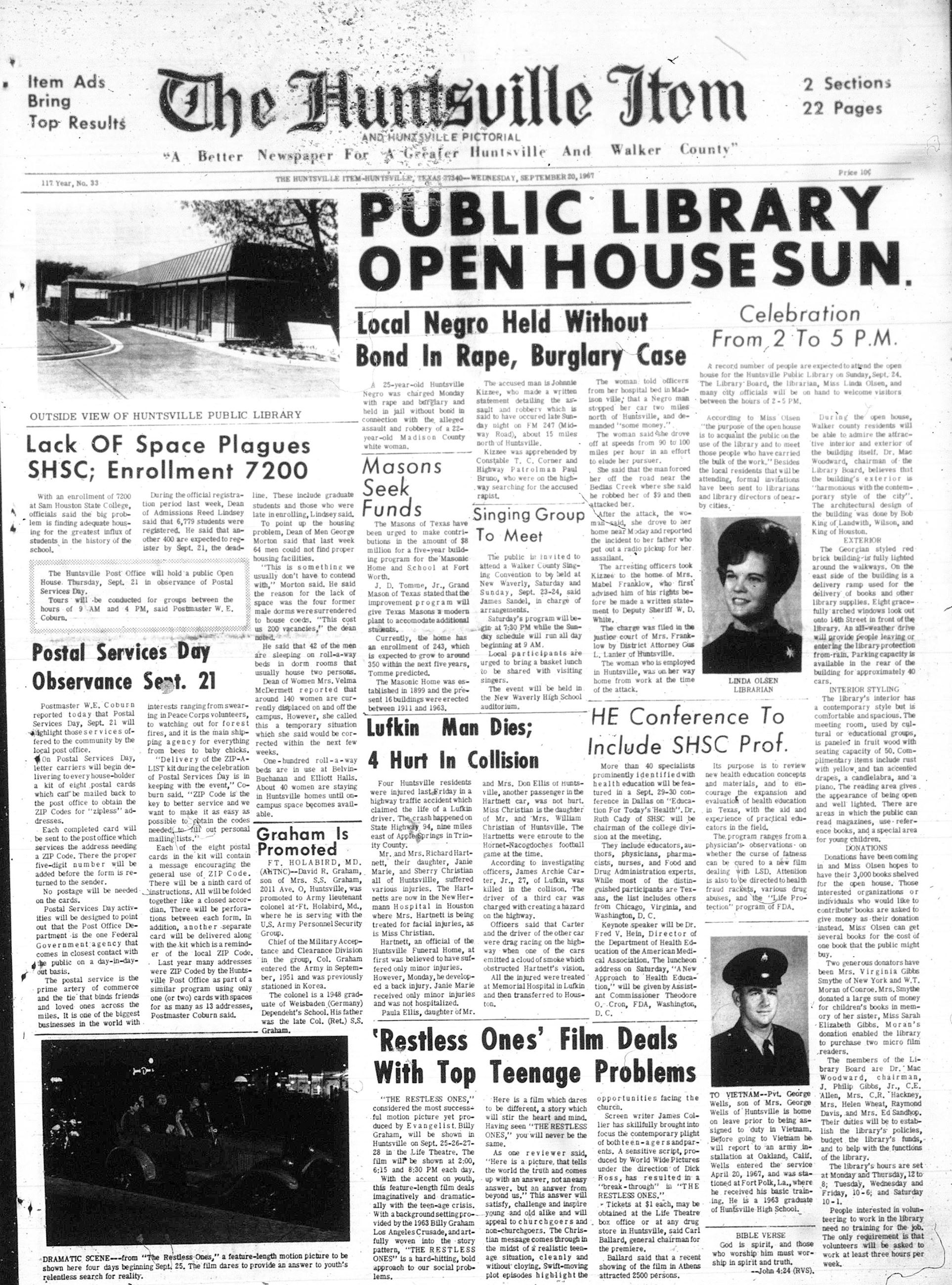 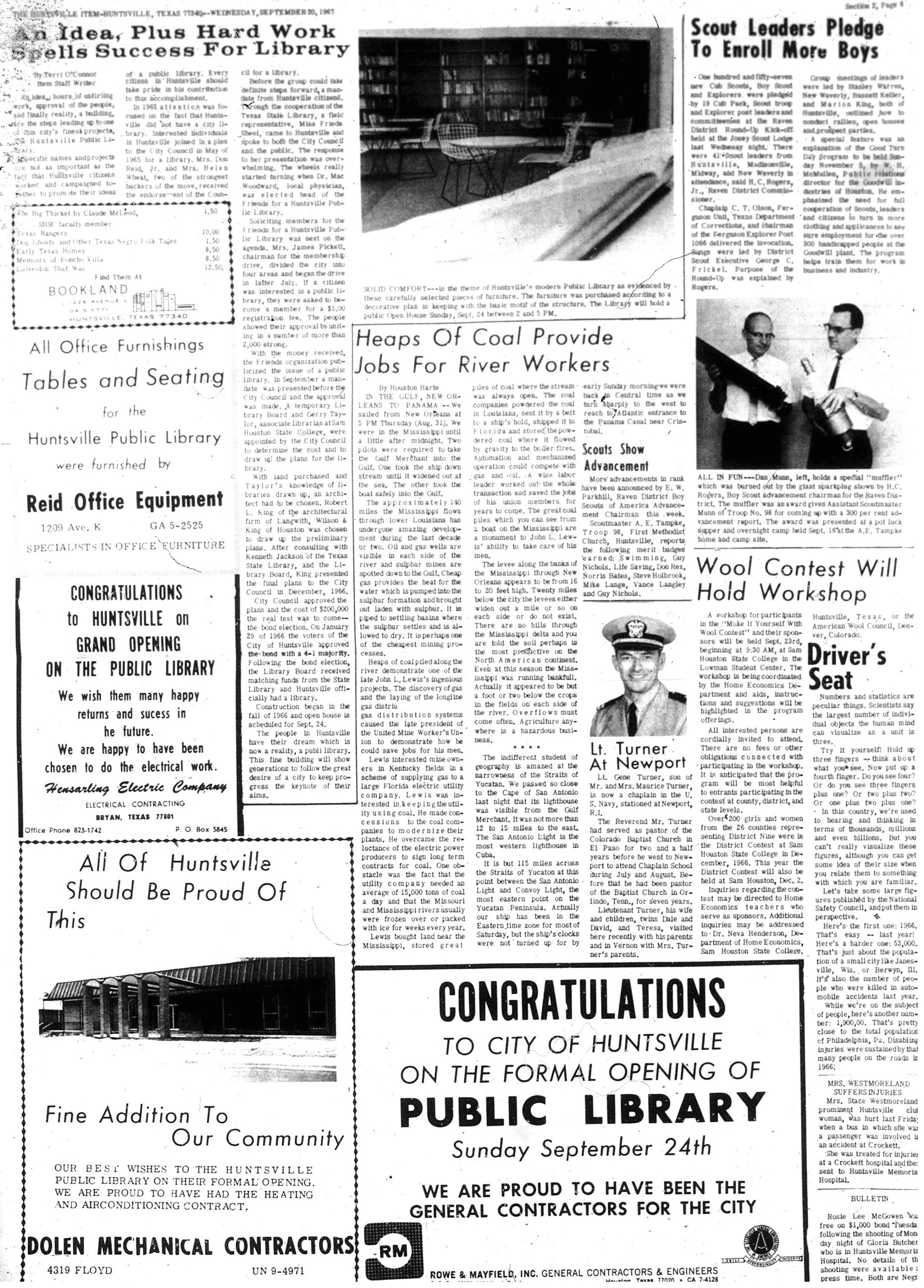 Walker County and Huntsville were without a free public library for the next twenty-five years. Efforts began in 1965 to build a public library on the current site. Membership in the Friends of the Huntsville Public Library was offered for one dollar. The Huntsville Item reports that more than 2000 members of the community became members. The Item also suggests that funds were raised to purchase the lot at the intersection of Avenue M and 14th Street. Details of the purchase of the land and transfer of title to the City of Huntsville were not provided. It should be noted that the notice for a bond election to build the library makes no mention of acquisition of the land. One can assume that the land was owned by the City of Huntsville prior to the bond election.

A temporary Library Board was established under the chairmanship of Dr. Mac Woodward. The Architectural Firm of Langwith, Wilson and King of Houston drew preliminary plans and drawings were submitted to City Council. The original drawings called for a 70 x 100 foot library with a meeting room, rest rooms, pantry, storage, office space and staff lounge. Capacity of the library was established an initial 25,000 volumes with room for an additional 25,000 volumes. The design called for a traditional Presidential design with arched windows and a copper roof line. The building design has also been referred to as an example of Georgian architecture.

The City Council of Huntsville approved appointment of Library Trustees on May 3, 1966. Dr. Mac Woodward (Chairman), Mrs. Helen Wheat, Mrs. C.R. Hackney, Mrs. Raymond Davis, J. Phillip Gibbs, Jr., C.E. Allen and Gerry M. Taylor were duly appointed. Construction bids were scheduled to be opened on July 28 to include general construction, plumbing, heating, ventilation, air conditioning and electrical work.  Costs were estimated to be “around $200,000”. The City Council approved a tax increase to cover bond retirement for the construction of the library. The tax rate was increased from $1.70 for each $100 valuation to $1.80.

The bond process to finance construction of the Huntsville Public Library encountered some difficulties. The bid process did not materialize as envisioned and the Library Board requested a revision to the proposal to cover the amount of $18,000 above the accepted budget of $136,000.  The Library Board requested that construction standards should not be revised as they “wanted a library that would last a long time.” The Library Board soon after created a memorial fund to solicit donations for the purchase of books. The memorial fund was seen as a way to offset cuts to the book budget imposed as a cost saving strategy. The Huntsville Item noted the generosity of Virginia Gibbs Smythe of New York for monetary donations for collection development.

Construction of the library began in the fall of 1966 and was completed in less than one year. The Huntsville Public Library was dedicated to the Public on September 24, 1967.  An open house was attended by more than 700 community members and out of town guests. Local dignitaries, Friends of the Public Library and the Library Board were present. Refreshments were served in the meeting room from 2 to 5 p.m. The Huntsville Item called the open house “Huntsville’s Event of the Season”. 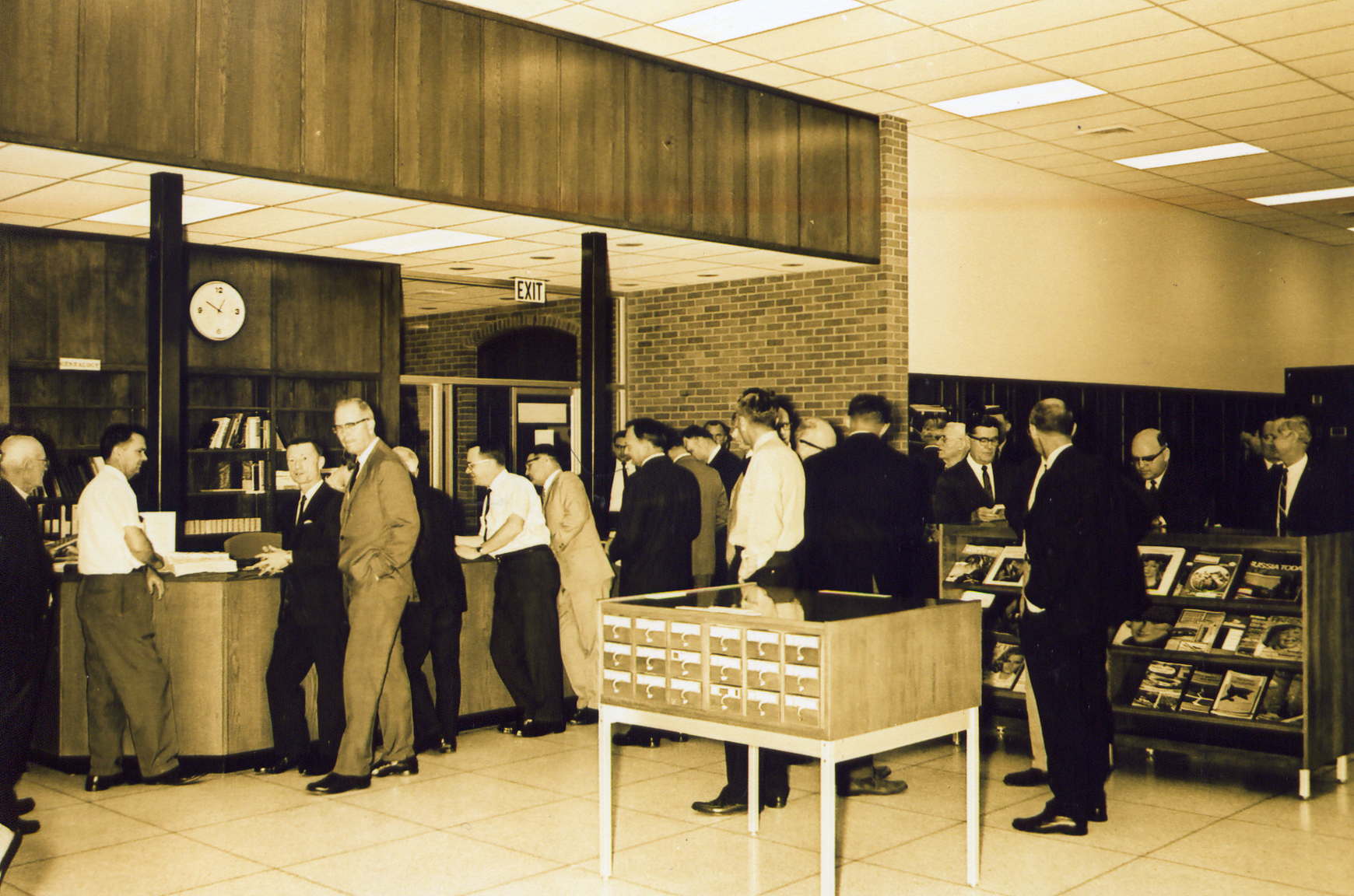 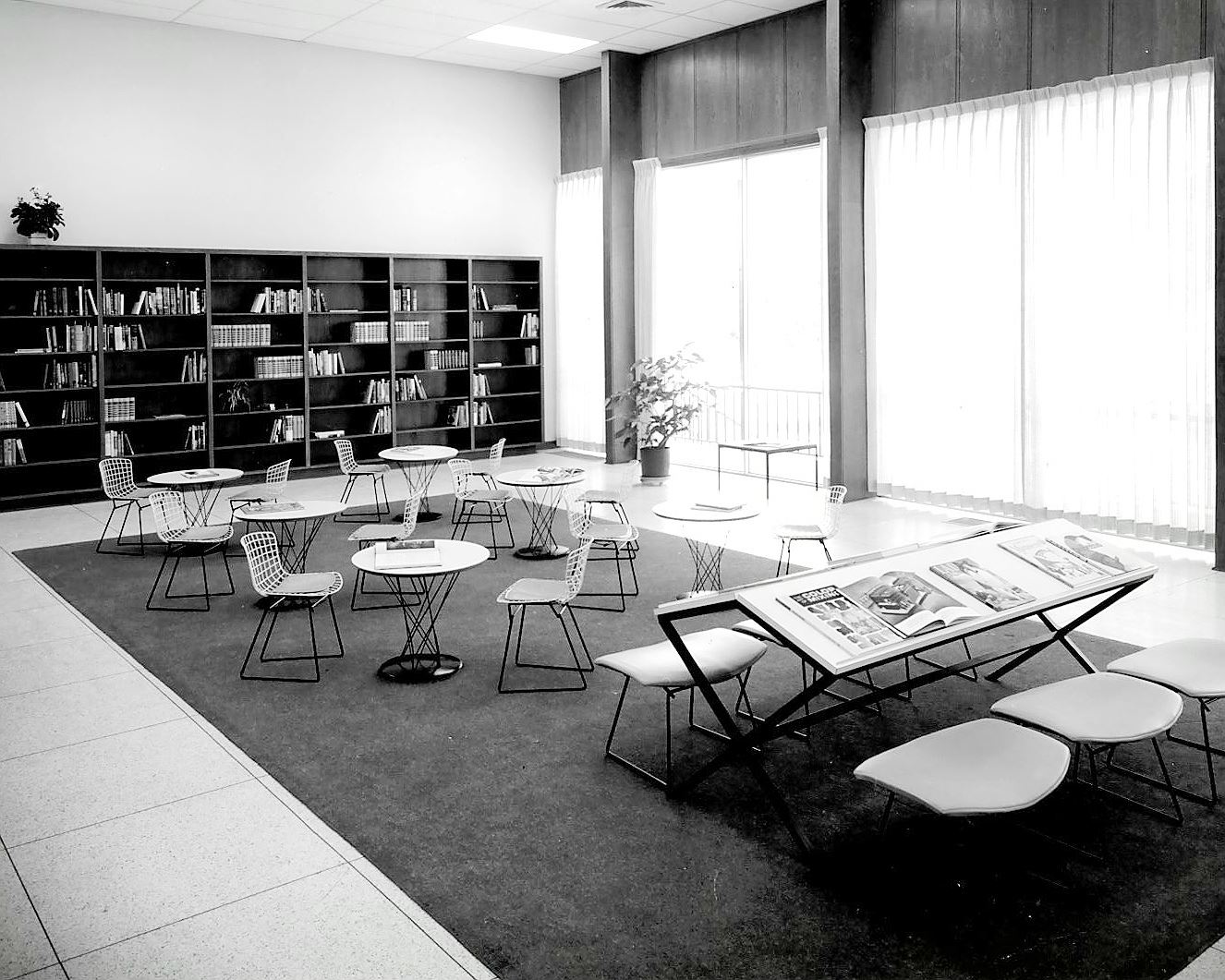 The inside of the library in 1967.
Stay notified Sign Up for Notifications
online paymentsMake Online Payments
employmentApply for Job
requestsSubmit a Concern or Request
Government Websites by CivicPlus®
[]